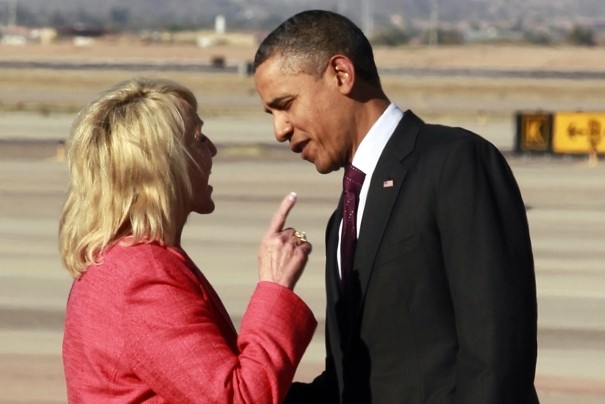 Evil is always devising more corrosive misery through man’s restless need to exact revenge out of his hate.” – Ralph Steadman

Revenge is the cruelty of choice for the lowest of the low, because it is the easiest path to take. The Democratic Party has become the Party of revenge, all under the tutelage of their boss Barack Obama. Obama is a master of the underhanded revenge tactic. If you enact policy that runs contrary to his agenda, or the agenda of the Democratic Party as a whole, he sends his goons to destroy you. If you enact school choice–like Louisiana Governor Bobby Jindal did–Obama will have Eric Holder sue you. If you act to secure your state’s border, because the Feds refuse to do so, Obama will put a severed horse’s head in your bed. Our president is the boss to a party of mobsters, and he is gaining power with the passing of each day.

Speaking of securing the border, remember back a few years ago when Arizona enacted the perfectly reasonable SB1070 bill, which would have done a lot to help the state with its illegal immigration problem? Remember when Obama, and his cronies in the media defamed Governor Brewer, and every good conservative who supported the bill? Remember when we were all labeled as racist xenophobes? Obama, and every liberal pundit deliberately stirred up controversy because the bill ran contrary to the liberal agenda of an open border. SB1070 was not racist, nor were its proponents, but by the end of the battle, the mob won with fear, intimidation, and pervasive negative coverage. The White House went to war with the state of Arizona.

Governor Brewer fought Obama tooth and nail on the issue, during which time a now famous snapshot was captured that shows Brewer yelling at Obama. The claim from the White House was that the meeting was perfectly pleasant, but the picture tells a different story. Well, now Obama is dishing his revenge. The federal government has begun dumping bus-loads of illegal immigrant youth into the state of Arizona.

According to Tony Lee, of Breitbart:

“Arizona Governor Jan Brewer said more than 1,000 illegal immigrant children will be dropped off in Arizona this weekend, continuing what she said is the Obama administration’s ‘dangerous policy’ of dumping illegal immigrants from Central American countries into Arizona, something that will continue into the foreseeable future.”

Not only is this policy dangerous, in terms of national security, but it is cruel to the youth who are being dumped in the state. But Obama doesn’t care. As long as the border remains open, and illegal immigrants are pouring in, Obama has done what he needs to do to progress the leftist ideology, and advance the power structure of which he is the head. The left needs illegal immigrants, and they will decimate any conservative who tries to stand their ground.