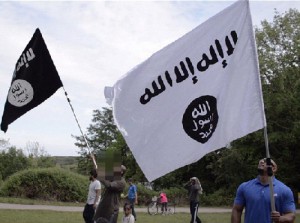 “Non-Muslims must be forced to wear red collars and shave their heads in the coming Islamic Republic of Britain,” says Muslim cleric who sponsored a barbecue for ISIS terrorists in Cardiff Park in London. The preacher adds that when Britain becomes Muslim, a Christian must open his house and accommodate a Muslim at all times, giving up his bed and sleeping on the floor.

Abu Waleed, 35, a leading preacher for a group banned last week for incitement to terrorism, was seen earlier this month at a barbecue in the Welsh capital where the banner of the Isis terror group – the Al Qaeda splinter group which the trio are fighting for – was flying.

According to friends, former students Reyaad Khan, Nasser Muthana, both 20, and Muthana’s 17-year-old brother Aseel were seen handing out leaflets for a group closely linked to Waleed outside a Cardiff mosque seven months ago. Khan and Nasser appeared on an Isis recruitment video this month.

Unemployed Waleed lives in a taxpayer funded council house in Hounslow, West London, and claims welfare benefits for himself, his wife and three disabled children. His group Need4khilafah, whose leader is Anjem Choudary, an infamous Muslim hate preacher who once led the Al-Muhajiroun group – banned after the deadly July 7 terror attacks in London in 2005 – dreams of the flag of Islam flying over Big Ben.

All muslims are NAZI / FASCISTS / COMMUNISTS!!