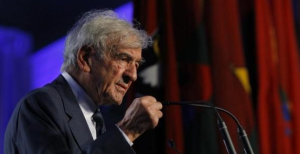 Elie Wisel, the heroic survivor of Auschwitz, is calling on Democrats to attend the Israeli Prime Minister’s speech to Congress.

(Nashville, Tennessee) — The train wreck in U.S.-Israel relations I have been warning about for several years has, tragically, arrived.

The President of the United States and his administration refuse to meet with Israeli Prime Minister Benjamin Netanyahu next week when he addresses a Joint Session of Congress. Rather, even as they negotiate a disastrous nuclear deal with Iran, administration officials are trying to persuade Congressional Democrats to boycott the speech. Meanwhile, Mr. Obama’s political strategists are currently in Israel actively working for the defeat Netanyahu and his party in the March 17th elections.

Without question, this is the worst crisis in U.S.-Israel relations in 67 years. Yet I thank God that some courageous voices on the Left — including Elie Wisel, the heroic survivor of Auschwitz, brilliant author and Nobel Prize Winner — are speaking out and calling…