The Bill and Melinda Gates foundation is full of Anti-Christian’s ( Antichrist’s ( 1 John 4:3 KJV )!!

Our EARTH is NOT overcrowded at all!! Our True GOD who art in HEAVEN said: “BE Fruitful and Multiply”!!

Our True GOD who art in HEAVEN DOES not Condone Abortion!!

Please PRAY for our Judeo-Christian Nation United States of America and Israel-Yisrael Everyday Everyone NOW!! We are in END TIMES on this EARTH HE CREATED!!

Our True GOD’S LOVE is from HEAVEN ABOVE FOREVERMORE through HIS SON JESUS ( YESHUA ) CHRIST!! Hallelujah and Maranatha!!

There is  Only ONE GOD, ONE SON ( Yeshua-Jesus Christ ), and ONE HOLY GHOST ( HOLY SPIRIT ) – They’re all THREE in ONE!!

Please Pray for the Holy Land of Israel-Yisrael and our Judeo-Christian Nation United States of America, Everyday ( 1 Thessalonians 5:17 KJV )!!

Jesus ( Yeshua ) Christ is KING of kings and LORD of lords, HE is the ALPHA and OMEGA, HE is the FIRST and the LAST, HE is the BEGINNING and END!! Glory Glory Hallelujah, Maranatha, and He Loves   ❤  You All, Amen–Amein!!

Love  ❤  Always and Shalom Everyone, 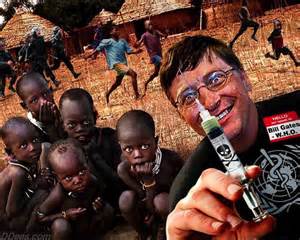 “Woe to them that devise iniquity, and work evil upon their beds! when the morning is light, they practise it, because it is in the power of their hand.” (Micah 2:1)

When I was outlining the main points of this article, at times I felt like I was reading a fictional novel — so EVIL, that it nearly took my breath away that people could do such horrific things to their fellow human beings.

When we hear the name of Bill Gates, we think of a man who became ridiculously rich from his empire, Microsoft. I will tell you this. You will never think of Bill Gates the same after reading this article.

In an interview, Gates talked about his family, in particular – his dad…