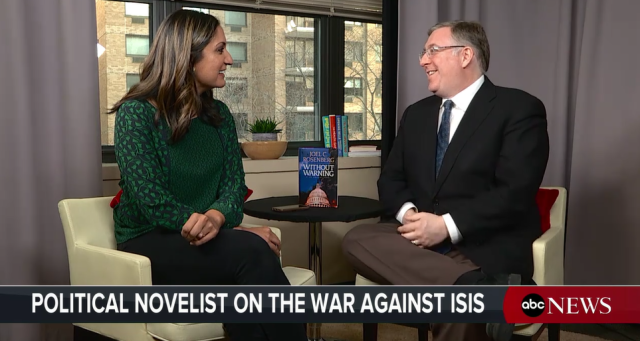 Correspondent Amna Nawaz, a lovely American Muslim journalist of Pakistani descent, asked me about the process of writing Without Warning, where I get the inspiration and ideas for my political thrillers, and how I wound up meeting with the King of Jordan.

She also asked me about the intersection between fiction and reality, my thoughts about the differences between President Obama’s approach to ISIS and President Trump’s approach, and why as a Jewish Evangelical I’m deeply concerned about Islamophobia.

During the interview, I noted that President Trump is the first American President to ever use the term “radical Islamic terrorism.” Neither President George W. Bush or Barack Obama used the term. I then called on Mr. Trump to give a major address defining what he means by the term, and urged him to be careful to explain the…